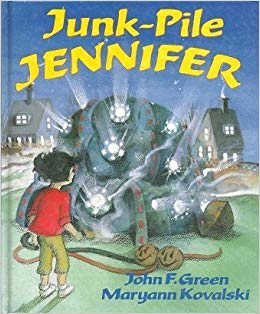 Jennifer gazed after the ship and sighed. “All that beautiful junk, gone. The least he could have done was offer me a ride.” She shrugged. “I guess I’ll move back into the house. That should make my parents happy.” And she trudged wearily through the back door.

Junk-Pile Jennifer is a story about collecting and how much is too much. Jennifer brings home any and everything she possibly can, including useless, broken trash. She arranges things in her room in various ways and can’t even fit her clothes in her closet, but she still insists on bringing home more. One day, her father can’t take it anymore and says she can’t bring home a broken washing machine, and Jennifer responds by saying she is going to move out. Against her mother’s wishes, Jennifer carries all her things to the backyard and creates a makeshift home for herself. That night, a spaceship from her favourite television program crashes into her backyard. After surveying the mess, Jennifer sets out to fix the ship using her tools and her massive pile of junk. She is able to fix the ship, and, for her efforts, the ship’s captain rewards her with a broken and homely plastic flamingo which she states will be the start for her new junk pile.

This whimsical story does touch on some themes of healthy behaviours in terms of collecting but doesn’t have a clear lesson to take away. However, Junk-Pile Jennifer could serve as a great conversation starter for parents with children who struggle to let go of things. The book is really well-written and has very natural dialogue. It touches on conflict between children and parents, confidence and letting go.

The illustrations in this story are colourful and expressive. They are well-done and clearly depict the story that is being told. Originally published by Scholastic Canada in 1991 and now reissued by Peanut Butter Press, Junk-Pile Jennifer would make a fine addition to any school library or personal collection.

Alison Schroeder has a Bachelor of Arts degree from the University of Manitoba and is a lover of children’s books.