Montgomery Schnauzer P.I. & the Case of the Stealthy Cat Burglar 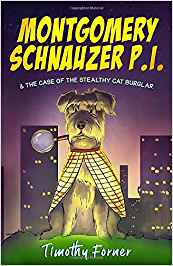 Montgomery Schnauzer P.I. & the Case of the Stealthy Cat Burglar

She smelled beautiful -- a mix of girl dog, slobber, and the dirt she'd just rolled in. For a second, Monty had trouble finding his voice.

"Well, I'm Duchess, and I have a problem." She sounded impatient.

Monty recognized her type from the stories his master used to tell him. She was a classic "dame in distress". Usually, the gumshoe (that's book talk for private detective) was well advised to avoid this person. Unfortunately for the hero, there's often a catch.

"I buried a bone in this park, and now I can't find it. Someone stole it!"

And when Monty did not respond, she said, "I need your help."

There was the catch. This dame had a case. No detective could resist a new and interesting case. Every mystery fan knew that. What would Monty's beloved master have him do? Monty was pretty sure the man would want him to help. The words came out of his mouth so fast, Monty was not sure he'd said them.

"I will take your case, madam."

Montgomery P. Schnauzer is a miniature Schnauzer (of course), cute (naturally), and is staying in the animal shelter because his beloved master had gone to sleep in the middle of reading a particularly exciting mystery story aloud to him and had never woken up. Sarah, a young woman several months into a post-break-up depression, has been badgered by a friend into visiting an animal shelter because she "needs a companion". Sarah insists that she is "just looking", but somehow Monty ends up sitting beside her in her car deep in conversation. Since Monty's previous owner had been so literary and read to him a lot, Monty understands a great deal of human language; unfortunately, Sarah is not very good at understanding dog talk. She just thinks he's barking or looking at her sympathetically. When Monty is hired by a female bulldog to find her missing bone, and, in the process, discovers first a cache of stolen diamonds and then the identity of the thief, he has to rely upon his own ingenuity and a bit of help from Jiff, a hyper-anxious, super-scared, but brave new dog-park acquaintance, and Casey, a female police dog whose master takes her more seriously than Sarah does Monty in order to apprehend the burglar.

The book begins "One cute little dog ..." and "cute" is the operative word here. Monty is cute, the story is cute, and the officer in charge of the helpful police dog is cute, the last point offering a potentially cute solution to Sarah's relationship problem. On the other hand, there are a number of truly appealing moments that are better than "cute". Jiff, the neurotic dog who, while not mentally quite up to par (challenged, one might say) and socially inept, but who still manages to be a loyal friend and helper, finds his counterpart in most schoolyards. Sarah's exasperation with her new dog -- if he "wasn't pulling, he was lagging behind, and that wasn't the first stranger they had almost tripped ..." -- rings a very true note for anyone who has ever had to deal with an untrained dog. (Query: did Monty's previous owner never walk him at all, but only read him detective stories? And fed him strawberries for breakfast.) And the way Monty manages to comfort Sarah when she is feeling sad and upset over her broken romance reminds the reader just why people love dogs so much.

Montgomery Schnauzer P.I. & the Case of the Stealthy Cat Burglar has practical virtues for young readers as well. The typeface is very plain (sans serif) and clear, double-spaced, with a great deal of white space. The chapters are short, and the illustrations add extra depth to the situations being described, a helpful point for early readers. Forner's website suggests the book as a classroom read-aloud; I see it more as an independent read which kids will view as a real accomplishment, even as they enjoy it. I liked it, too, especially the portrait of Fritz the Ninja cat who was prepared to take on all comers, human as well as canine and feline.

Mary Thomas of Winnipeg, Manitoba, may be retired, but she has never overcome her love of dog (and horse) stories, however cute.