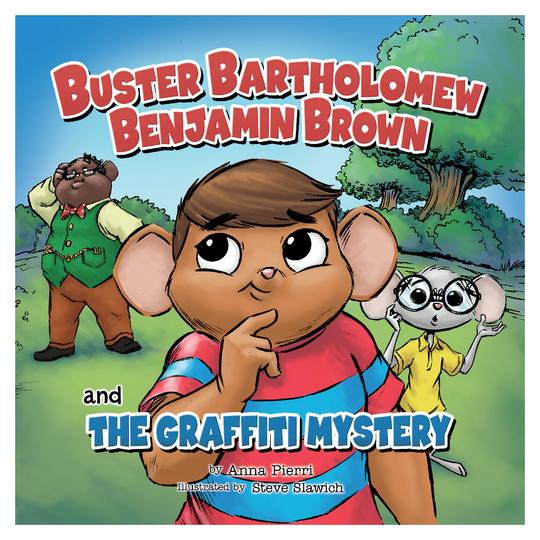 Readers first met BBBB, the anthropomorphic mouse, in Buster Bartholomew Benjamin Brown and the School Yard Bully in which BBBB bested the bully who was picking on his buddy, Just Billy. The opening pair of pages of Buster Bartholomew Benjamin Brown and the Graffiti Mystery, which introduce BBBB and his mission (“to take care of his town”), are a repeat from the first book. In those two pages, readers also learn that:

He has four fun-filled sisters, he thinks they are silly.
He has a best friend, whose name is “Just Billy.”

Author Pierri apparently assumes that her readers are familiar with the contents of the series’ opening book as she doesn’t re-explain how Just Billy came to be so named. The “four fun-filled sisters” play no role in this offering. Returning, however, are the two bad guy rats, Rocky Ratnik and his follower, Freddie. A new character is the school’s principal, Principal Flutter, who is quite upset because someone has spray painted graffiti on the school’s exterior walls. Initially, it appears that the principal believes that BBBB is somehow involved in this act of vandalism as he thinks:

There’s mischief afoot,
and I feel you’re in it,
right up to your ears –

However, when BBBB appears on the scene, he reassures the principal:

Principal Flutter, he said,
now sir, don’t you worry!
I’m right on this case.
I’ll solve it in a hurry.

And solve the mystery he does by following the “paint” footprints that lead to Rocky Ratnik and Freddie who confess, offering as a rationale for their actions:

We were drawing graffiti
cuz it makes us look cool.
And we do what we want,
even though we’re at school.

While the rat pair are punished by detention “for one year and one day!” and having to “clean up your mess...every day at recess!”, Principal Flutter delivers a message to the whole school:

So please take heed students –
respect must be shown,
especially for property that you do not own.

And remember that if you are breaking a rule,
the fact that you do so does not make you look cool.

As was the case in the bullying story, Pierri’s poetic text largely takes the form of quatrains which principally employ an AABB or ABCB rhyme scheme. The book’s intended audience may be a bit too young to get the reference to Nancy Drew when Just Billy mentions the Mousey Drew mystery books. Once more, Slawich’s bright cartoon-style illustrations are fun while also contributing to characterization.

With its simple message of respecting others’ property, Buster Bartholomew Benjamin Brown and The Graffiti Mystery is a worthwhile school and public library purchase.