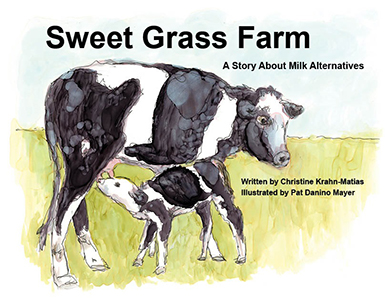 A Grade 3 Class visit to the farm provides the starting point for a book which seems at first glance to be about the husbandry of domestic animals. Part way along, it takes a turn to explain not only the recent rise of interest in non-dairy ‘milks’ but veganism in general.

Alex is excited to meet the goats, pigs and cows of Sweet Grass Farm.

Farmer Paula gave the children apple slices, leftover bread,
and cobs of corn to feed to the pigs. Their snouts tickled
Alex as they ate out of her hand. They were so gentle and
squealed with delight when their ears and backs were scratched.

But the joyful tone changes when classmate Jay expresses concerns during the farmer’s explanation of commercial milk production. Why do the baby calves have to be removed from their mothers so early?

…Farmer Paula answered. “As you know, Grade Threes, milk comes from cows.
If the cows kept their babies, the babies would drink the milk.
Then we wouldn’t have milk for people to buy in the stores.”

“I knew that. We don’t drink milk at my house because my mom
doesn’t eat or drink anything that comes from animals.
We only eat and drink foods that come from plants.”

Later Jay describes a vegan diet in more detail for Alex and their other friends, and when Alex gets back home, she talks about what she has learned with her family, suggesting that some of the elements of veganism be adapted into their diet. Dad says:

“I’ve seen a lot on the news about how raising millions of
animals for people to eat is hard on our planet. It takes a lot
of water, land and energy to make our burgers. I can also try to make
some changes. The next time I barbeque I’ll make some tasty veggie
burgers. We can eat less meat as well as drink milk alternatives.”

Alex’s words wrap up the text of the book.

“I feel a lot better already. I’m glad we could talk about this.
And even though it was hard, I’m glad I learned something
new today. Now I can share this information with more
people so mama cows like Bella don’t have to keep having
their babies taken away from them.”

The message about the benefits of veganism seems a bit at odds with the beginning of the book. Clearly Farmer Jake and Farmer Paula would not have much of an enterprise if they were not allowed to raise their animals for milk and meat. The energy of the book changes along with the topic, going from the children’s’ glee with the novelty of being up close to the animals to an earnest and wordy screed against the use of animals as a food source. The dialogue seems scripted, and the children’s voices do not always sound like those of real 8-year-olds.

Explaining what being vegan is to young readers is something that may be of interest to some families and to teachers doing units on where we get our food, but Sweet Grass Farm is somewhat confusing in how the material is presented.

The accompanying illustrations by Winnipeg, Manitoba, watercolourist Pat Danino Mayer uses an experimental technique of alcohol-based inks. The animals are realistic and engaging, but the human figures are awkward, and many of the scenes have an unfinished appearance.