The Life Cycle of a Rabbit 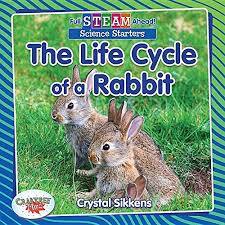 The Life Cycle of a Rabbit

When a baby rabbit is born it begins its life cycle. A life cycle is the changes that happen to an animal during its life.

Crabtree’s new “Full STEAM Ahead!” series consists of 20 titles that are divided into five groups of four: “Science Starters”. “Technology Time”, “Math Matters”, Engineering Everywhere” and “Arts in Action”. Crabtree explains that “Full STEAM Ahead is a literacy series that helps readers build vocabulary, fluency, and comprehension while learning about big ideas in STEAM subjects.”

For example, the learning objectives for The Four Seasons consist of:

Readers will:
* Explain that a cycle is a sequence of events that repeats itself again and again.
* Recognize that Earth’s rotation causes seasons, and describe some changes that happen each season.
* Identify information provided by pictures and diagrams, and information provided in text.

The text then identifies the “High-frequency words (grade one)” that appear in the book as well as words described as “Academic vocabulary”. For example, in the case of The Four Seasons, the latter words were: “cycle”, “earth”, “repeat”, “season”, “tilted”, and “weather”.

The rest of the half-page consists of suggested “Before, During, and After Reading Prompts’ that a teacher or parent could employ if using the book in an instructional setting.

Assistance for educators continues on the book’s closing page which provides teachers with detailed information on conducting a STEAM activity that will help “readers extend the ideas in the book to build their skills in science, technology and language arts.” In addition, teachers can access detailed Teacher’s Guides via Crabtree Publishing which will also allow them to download any worksheets needed to complete the suggested STEAM activity.

The four books in the “Science Starters” subset of the “Full STEAM Ahead!” series are Day and Night, The Four Seasons, From Seed to Pumpkin and The Life Cycle of a Rabbit. Common to all four books is readers coming to understand the concept of “cycle”.

The Life Cycle of a Rabbit features a wild bunny family and, via text and adorable bunny photos, follows a litter of kits from their birth until they reach adult maturity about a year later (though they can evidently reproduce at three to six months of age). Sikkens provides lots of interesting information about rabbits, so much so that it’s easy to forget that the book’s focus is the animal’s life cycle. Consequently, the closing pair of pages titled “Repeating Cycle” is an appreciated reminder. While the text and illustrations in From Seed to Pumpkin indicated that the plant eventually died, The Life Cycle of a Rabbit does not mention death as the final stage in a rabbit’s life cycle (though “premature” death is somewhat implied in the following text).

Kits have to be careful when leaving the nest. Many animals eat rabbits. Kits are small. They are easier for these animals to catch.

Collectively, the four “Science Starters” books, with their reader-friendly text and highly illustrated contents, do a fine job in introducing early years students to the concept of a “cycle”. Though the books can be used in any order, there is a flow to their content that would suggest. that teachers begin with Day and Night and follow it with The Four Seasons, them From Seed to Pumpkin and finally The Life Cycle of a Rabbit.