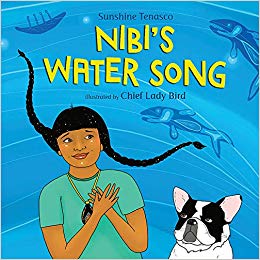 Children and youth possess an unfolding and open-ended agency. Increasingly, the remarkable agency of the child/youth-as-citizen, capable of perceiving, cogitating, and enacting change in the interest of self, the social collective, and the planet, is being recognized and celebrated. Nibi’s Water Song, for instance, speaks compellingly and unforgettably of the budding social justice yearnings, ecological consciousness, power, and aspirations of such local and global subjects. Eye-catching, richly illustrated, and dramatic, this literary offering centers a conscientious Indigenous girl—Nibi—whose thirst for, and difficulty in finding, clean water in taps at home, lead her on a quest to obtain and agitate for the life-dependent liquid. Nibi apprehends that clean water is not accessible to everyone. This realization inspires her to work collaboratively with others—animals and humans—to find and preserve it.

Estimable in text, images and intention, the picture book features culturally-informed, desirable relations of power and spotlights a subject constantly in relations with others. From the moment Nibi rushes through the front door in search of clean water, she is in-relation—at first, with her dog. Finding no clean water at home, the pair head to the river where Kigonz, the fish, informs her, “You can’t drink this dirty water!” Next, the duo seeks help from a neighbor who would only share once, and, as much as Nibi tried to get help from others by knocking on doors, she was initially unsuccessful. Then, aided by her furry companion, she became creative and “danced and sang down every street with a giant sign”: “I am thirsty, thirsty Nibi and I need water!” The sign stated a fundamental truth: “Water is life”. Refusing to be immobilized by doubt and fear, Nibi looked for water everywhere: “under rocks, “in swamps”, “in houses” and she “asked all of her friends.” “They had no water to share.” Undaunted, the activist-child-citizen kept on singing—a scene exquisitely rendered by the illustrator through the use of Anishinabek symbols.

In due course, the emotional, and embodied power of the young girl’s voice, actively/agentically expressed through song, is effective, and “then all of Nibi’s friends started singing and dancing with her”: “She is thirsty, thirsty Nibi and she needs water!” This scene is evocatively and powerfully materialized by Chief Lady Bird in a double-page spread depicting Nibi-in-relation to three Anishinabek females, wearing culturally-inspired regalia and other markers of identity. Of note is the thin black line flowing from Nibi, vine-like, as plant-life with flowers, to her friends, and from the friends (including water creatures), in circular, undulating fashion back to Nibi, depicting the connectivity and interrelationality of all creation. This is an image resplendently filled with cultural, emotional, intellectual power—overall, Anishinabek signification.

After some time, the singing and dancing of Nibi’s friends amplified and reached “the people in the big, shiny houses” and they “came out.” They listened “[a]nd soon they were all singing to Nibi’s tune: “She is thirsty, thirsty Nibi and she needs water.” This is captured in a double-page spread depicting the emergence of new forms of solidarity, cross-cultural, and inter-racial collaboration, spearheaded by Nibi—a girl/youth caring for creation. Also, the illustration shows a community using a variety of social practices (singing, dancing, use of print (signs) to communicate the importance of preserving and sharing water. Chief Lady Birds’ depiction of community members coming out to join Nibi and her friends illustrates the powerful agency that arose through the socio-ecological activism of a child citizen and her collaborators.

As concerns structure, the story is told with a linearity that makes its plot development and messages accessible to a wide range of readers and listeners—especially younger ones. In
Nibi’s Water Song, children will find an appealing and relevant story, beaming an important issue that is meaningful to all; and in Nibi, a motivating, winning, and memorable character.

From its irresistible ocean-blue, calming, and enchanting front and back panels, to the recurring interplay of blues and greens, skillful and delightful infusion of browns, burnt orange, pinks, and yellows, this work is a visual delight that eloquently communicates the richness of Indigenous—Anishinabek—visual culture. The drawing and painting style of Nibi’s Water Song is resonant of, and perhaps inspired, by the galvanizing work of the great Anishinaabe Woodland artist, Norval Morriseau (member of the Indian/Indigenous Group of Seven).

Nibi’s Water Song is an important addition to the mixed genres of contemporary realism and fantasy. Grounded in Anishinaabe cosmology, this melding of genres registers a cultural perspective that honours the boundedness of, and the interrelationality between, all creation (plants, animal, and humans), and persuasively presses readers in service of caring for creation. Dexterously and ardently illustrated, the picture book is a potent and moving advocate for ecological, land, and social justice to stem existential suffering and the devastation that would result without clean water and its equitable distribution to all.

The creators, Tenasco and Chief Lady Bird, have produced an enjoyable, optimistic work that is effectively and endearingly focalized through the eyes, voice, actions, and from the heart of an irresistible heroine—a child citizen/community member who unhesitatingly assumes the responsibility that accompanies membership in such collectivities. Nibi’s Water Song is a well-timed, delightful, and substantial contribution to Canadian children’s literature. It boldly and sensitively foregrounds serious socio-environmental issues, along with individual as well as communal agency and collaboration. A solid choice for all!

Dr. Barbara McNeil is an Instructor in the Faculty of Education, the University of Regina, in Regina, Saskatchewan.