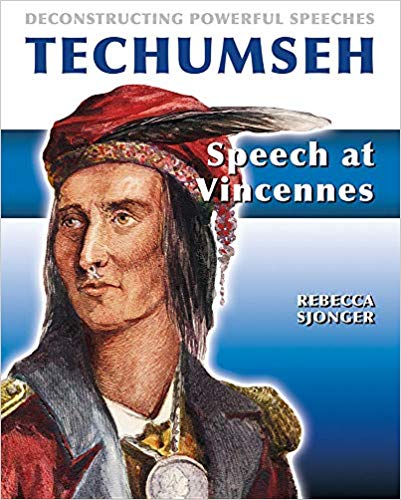 Every speech uses rhetorical language in its own ways. It is supported by rhetorical devices, such as:

Tecumseh Speech at Vincennes is part of Crabtree’s new series “Deconstructing Powerful Speeches”. Like the other books in the series, Tecumseh Speech at Vincennes begins by establishing the social and political context of the time of the speech. British settlers had been moving into the area west of the Appalachian Mountains and into the territory that had been set aside for Indigenous people. The problems for Indigenous people got worse when the Americans won the American Revolution. The original land agreements made with the British were not only ignored, they were worthless. Tecumseh and his brother, Tenskwatawa, became leaders of the Shawnee.

Tecumseh had two goals when he headed to Vincennes. He planned to argue that Governor Harrison could not buy land from any one group. Tecumseh believed the land belonged to all the nations. He also wanted to convince the Indigenous peoples who were selling their land to join his confederacy. He felt that, together, they could resist the American takeover

All four books in the “Deconstructing Powerful Speeches” series are written by the same author, Rebecca Sjonger, and follow the same format. Tecumseh Speech at Vincennes includes a Table of Contents, bibliography with references listed for each chapter, additional resources listed in “Learning More”, and an index. Although the book is about a famous historic figure, the focus of the book is on how a powerful and persuasive speech is written and delivered. The chapter titles reflect this focus: “Persuasive Primary Sources”; “Words and Meaning”; “Analyzing Perspectives”; and “Influences Then and Now”.

The error of omission is often overlooked or difficult to illustrate with examples. “Analyzing Perspectives” includes a section on what may be omitted in a speech, asking readers questions to guide their skill development in analyzing primary sources and using Tecumseh’s speech as a model.

To uncover what may be missing form a speech ask:
What are the possible limitations in this primary source?
Are any facts left out or presented unfairly?
What other sources could be investigated?

The text is well-written and well-supported by historic black and white photos, drawings, historic posters, maps, and modern day colour photos. Excerpts from the speech at Vincennes are printed with sidebars that analyze sections of the speech, adding historical data to explain the significance of the highlighted words.

In the chapter “Influences Then and Now”, the legacy of Tecumseh’s speech is discussed with reference to a speech by Alicia Elliott, a member of the Tuscarora nation from the Six Nations of the Grand River community. Her speech echoes Tecumseh’s words 200 years later.

A memo to Canada: Indigenous people are not your incompetent children … the Canadian government continually prevents us from creating meaningful change … like every decision Canada makes about us, without us, we’re supposed to smile and accept these arrangements … regardless of how it affects our families and our lives …Canada’s approach to Indigenous people has always been akin to that of a paternal head of house in a fifties sitcom: Father knows best … There is an alarming tendency to consider 634 distinct Indigenous nations as one homogeneous group … Canada has continually failed its treaty obligation to respect Indigenous nations’ right to steer our own canoes … But we will get there.

Tecumseh: Speech at Vincennes” is an excellent combination of deconstructing persuasive writing skills and historical content, including Canadian content. Although the majority of the book deals with a speech made in the United States, the connections to Canada and Indigenous nations in the present adds good value to this book.