Susan B. Anthony: On a Woman’s Right to Vote 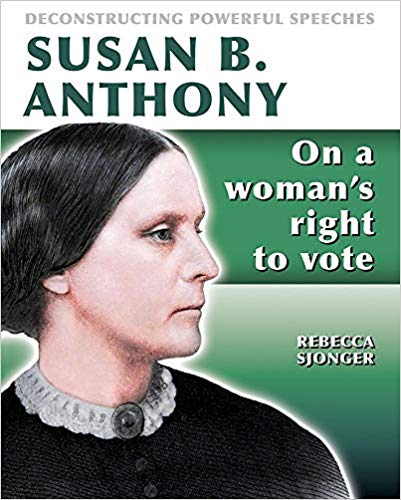 Susan B. Anthony: On a Woman’s Right to Vote

In the mid-1800s, American women were treated like second-class citizens. They had fewer rights than men did. For example, most women could not own property, have custody of their children, or vote. Anthony’s parents raised her to believe that all people should be treated equally. Their Quaker faith shaped the way they lived. The family’s farm became a meeting place for people who shared their views.

Anthony’s father educated all seven of his children – the boys and the girls. Susan went onto become a teacher in her twenties. On the side, she fought to end slavery, and for the rights of women, workers, and students. However, she found it difficult to influence state and national leaders because she could not vote.

Susan B. Anthony: On a Woman’s Right to Vote is part of Crabtree’s new series, “Deconstructing Powerful Speeches”. Like the other books in the series, Susan B. Anthony: On a Woman’s Right to Vote begins by establishing the social and political context of the time of the speech. The American Civil War ended in 1865. In 1868, the 14th Amendment of the American Constitution defined the rights of American citizens, including the right to vote. In 1872, Anthony was arrested for voting in a presidential election. In a speech titled “Is it a crime for a U.S. Citizen to Vote?” that Anthony delivered several times between her arrest and her trial, she attempted to educate potential jurors about her case.

Are women persons? ... I hardly believe any of our opponents will … say they are not. Being persons, then, women are citizens, and no state has a right to make any new law, or to enforce any old law, that shall abridge their privileges or immunities. Hence, every discrimination against women in the constitutions and laws of the several states, is … null and void … To be a person was to be a citizen, and to be a citizen was to be a voter …

“Are women persons?” may sound very familiar to Canadian history students. In Canada, an appeal of The Persons Case resulted in Canadian women who were British/Canadian citizens receiving the right to vote in 1929. This was nine years after the 19th Amendment to the American Constitution ended discrimination against women’s voting rights. Unfortunately, there is no mention of the Canadian case in this book.

All four books in the “Deconstructing Powerful Speeches” series are written by the same author, Rebecca Sjonger, and follow the same format. Susan B. Anthony: On a Woman’s Right to Vote includes a Table of Contents, bibliography with references listed for each chapter, additional resources listed in “Learning More”, and an Index. Although the book is about a famous world history figure, the focus of the book is on how a powerful and persuasive speech is written and delivered. The chapter titles reflect this focus: “Persuasive Primary Sources”; “Words and Meaning”; “Analyzing Perspectives”; and “Influences Then and Now”.

The text is well-written and well-supported by historic black and white photos, drawings, historic newspapers, and modern day colour photos.

Unfortunately, this is where the good news ends. Susan B. Anthony is an important figure in the women’s suffrage movement, but there is no connection to Canadian history included in this book. The obvious mention of The Famous Five/Persons Case in Canada is omitted. This oversight greatly reduces the value of this book in a Canadian school.