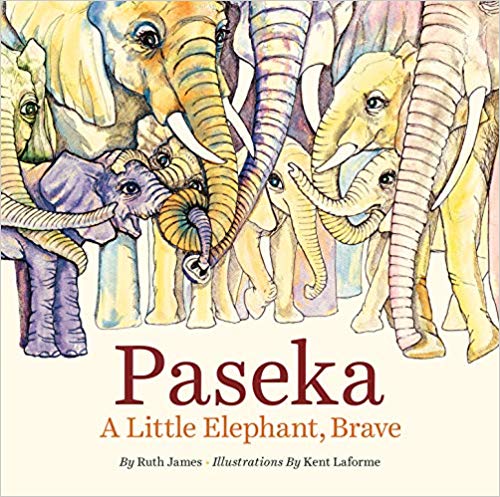 The lives of and dangers to elephants in the wild provide an appealing theme for books for young readers as is evidenced by several recent publications (Margriet Ruurs’ The Elephant Keeper: Caring for Orphaned Elephants in Zambia; Baby Elephant Joins the Herd, by Benjamin Richmond, 2019).

In Paseka: Little Elephant, Brave, we are offered a treatment in story form of a baby African elephant who has been separated from her mother. Paseka is threatened first by a pack of hyenas. Worse could be to come in the form of some human hunters, but the shape and size of their grey jeep reminds Paseka of her mother. And so:

The little elephant followed the jeep into the safari camp.
Panicking at the strange smell of humans, she veered blindly into
an old storage shed. Trunk swinging, ear spread wide, Paseka
bounced against the flimsy walls.

“Where are you, Mama?” she trumpeted.

The humans are not poachers, but animal rescuers. They capture Paseka and take her to join a large herd of other elephants already at a rehabilitation centre. Paseka hopes to find that one of them is her mother, but that is not to be. She is initially frightened by the attitude of the large matriarch of the group. Perhaps these huge beasts are as dangerous as the hyenas which had bitten her?

On came the matriarch, making the earth quake as she pounded towards her.

Suddenly all the elephants were coming. So many… The entire herd was moving.
The ground shuddered. Would they attack her like the hyenas?

No! The elephants deliberately slowed and plodded into a big circle around
Paseka. Every head was turned to face her. Trunks reached out. Paseka
was like the centre of a daisy flower. She felt tentative, searching pats.

Although Paseka’s real mother is not with the herd, Paseka finds nourishment and love among the other females. Even in the face of the sight of the bones of other unfortunate elephants which have been the victims of poachers, the care of the herd and the memory of her mother’s comforting “heart song” carry Paseka through.

Although Paseka has not found her mother, she has found her clan, including a new mother and a new sister. Her real mother’s words reverberate inside as she takes on this new life.

It was as if the whole herd was listening. Shuffling slowly,
colossal feet came closer and closer, trunks lifted.

A little elephant, brave, is saved.

Watercolour and ink illustrations by British Columbia artist Kent Laforme make use of many tones of grey, blue and yellow. They show the human and animal forms in active poses, and yet there is an abstract nature to some of the images too. One of the most engaging spreads comes near the end of the book – an aerial view of the long line of elephants wading along a shallow river, with the huge, shadowy head of Paseka’s mother looking down from the sky.

Back matter to the book includes the text of the story in Kiswahili; the author’s note about how she wrote the story while working with the African Children’s Book Box Society in Kenya; and a photograph of the real Paseka who was endangered by poachers and inspired the work.

Paseka: Little Elephant, Brave is a book which provides some information about the life of African elephants, but the fictional format does sometimes allow sentiment to get in the way. There are a few instances where the author’s attempts at poetic writing are obtrusive and overly anthropomorphic. For example:

A baby elephant’s heart can ache with hoping.
And, when observing the elephant bone-yard:
Paseka was flooded with love. She walked in a cloud of it. Carefully,
politely, Paseka caressed the bones too, using her tiny trunk
like a kiss-tip. How close her mother seemed, just one song
away from the living herd.

Paseka: Little Elephant, Brave is not an essential purchase, but it would be a useful addition to larger collections.